The latest offering in our short series about comicbook characters that have been orphaned by the recent reboots in both the Marvel and DC Universes. Characters that were featured before the reboots, or even featured prominently during the Big Events (Secret Wars and Convergence), and are gone now.

This week’s character is a bit of a black (or should I say blonde?) horse: the Blonde Phantom.

Originally created for Timely Comics (marvel’s predecessor), Louise Grant came into being in the mid-1940’s as an attempt to increase female readership. The Blonde Phantom released a few years after Wonder Woman made her first appearance, and offered stories within the vein of noir, a somewhat darker response to Timely’s other leading ladies like Millie the Model and Venus (who headed romantic comedy titles) and Namora and Miss America (who were in more straight superhero books). The Blonde Phantom echoed Quality Comics’ Phantom Lady, and is occasionally viewed as, on some level, the inspiration for the first Black Canary, as Louise was a mild mannered secretary in her day job who fought crime at night with her expert martial arts skills and a sexy ensemble.

Purportedly, the Blonde Phantom was created by Stan Lee and artist Syd Shores as a direct response to Wonder Woman’s popularity, although Al Sulman also claims to have been her originator, and the writer who was behind All Select Comics, the title in which she debuted (which was immediately renamed Blonde Phantom Comics after her first appearance).

As with other Timely titles aimed at women in the 1940s, the series only lasted about 2 years, but there were a number of crossovers and interactions between all the ladies of Timely. Blonde Phantom Comics eventually changed title and format to become an anthology series of romance strips titled Lovers. 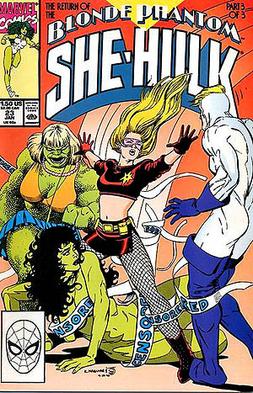 –      The only character other than Shulky able to break the fourth wall in Sensational She-Hulk, Louise acknowledged her storied history, as well as how aging works for comicbook characters in a charming and unexpected way. Not only did her inclusion in the series inspire some of the storylines in Dan Slott’s She-Hulk run, but with the success of characters like Deadpool and Harley Quinn, this bender of reality could find huge success in the current comics atmosphere.

–      Millie the Model dressed as the Blonde Phantom for a cosmetics company concurrently with the release of the actual Blonde Phantom’s first appearance. That kind of kismet is pretty rare and special.

–       Mark Mason and Louise had a reverse Clark Kent/Lois Lane relationship; Mark was in love with the Blonde Phantom and though Louise was a bit of a bore. This subversion of the classic superhero romantic trope could resonate strongly with a modern comics audience.

–       Women are the majority audience for comics now, and with the success of oddball titles like Harley Quinn and female-led crime and mystery stories like Black Widow, Pretty Deadly, Spider-Woman, Sex Criminals, Elektra, Poison Ivy, Bitch Planet, Catwoman, and the upcoming Vampirella revamp, the Blonde Phantom could easily find a niche on the waterfall racks.

–       The Blonde Phantom is technically a female legacy character, with Louise’s daughter Wanda briefly donning the domino mask. Wanda was last mentioned in 2007’s the Initiative.

–       Howard Chaykin’s Avengers 1959 miniseries teamed up the Blonde Phantom with her old friend Namora, as well as Nick Fury, Sabretooth, Kraven, and Howard Stark, and was instrumental in defeating the Spider-Queen and Dieter Skul.

–       A native of Hoboken, New Jersey, experienced in legal proceedings, and an expert detective herself, the Blonde Phantom would fit right in with the current new and different Marvel universe pretty well (she could team up with Patsy Walker’s new company, or offer an old school perspective to Kamala).

–       With Marvel going back to their Timely roots, featuring Millie the Model in Secret Wars and giving romance comic star Patsy Walker her own solo title, Louise Grant doesn’t seem like such a far-fetched heroine to return to the pages, young or old.

–       Louise has a lot of history, and last we saw her she was definitely not how you would imagine a superheroic leading lady: older, heavier, and not as interested in fighting crime.

–       Despite her most recent appearance only being a few years old, the 2011 mini series Avengers 1959 did not solidify her relevance in the Marvel U.

–      With the introduction of paralegal Angie Huang in the most recent She-Hulk solo series, Louise’s most successful niche was filled by someone else (with apparent supernatural powers).

There’s still a chance Louise (or Wanda) could find success. While the Blonde Phantom doesn’t represent something wholly unique to modern comics (as a white, blonde woman), Louise does offer up an older perspective, a chance to show more body diversity a la Valient’s Faith, and a chance to have some real commentary on the condition of comics without it coming from a nutjob like Deadpool.

I could easily see Louise playing a Jarvis-style role to a younger woman who’s just starting out in the superhero business, or a woman who, while a veteran of the cape game, needs smart and sarcastic support…