My long-term gaming group and I have been playtesting my design for Powers High. We have played 3 times, and each time has been a lot of fun. I am very lucky because I have good players. Things had gotten very dark in our game, and we wanted a break from the all the heavy stuff.

We have had a fun time every session. The players are invested in their characters and the world. But, what has been most fun, is the dice, when they are rolled,, why they are rolled, and the results.

In many games, and game theory, rolling dice brings with it uncertainty. But, does it really? Often, it brings with it binary results. Failure indicates one thing, and success another. Hit, and then roll damage, or miss.

In our most recent session however, there was a dice roll that ended with a result I didn’t see coming.

One of the conceits of the game is that the 5 specific traits/ tropes determine how well characters fail or succeed at extended actions involving those tropes. The sportsball playoffs, roll Athlete. Final exams, roll Brain. Play video games, roll Outcast.

This particular action was a Halloween party, one that involved students sneaking out to drink, etc.

There was a drinking game, with involved 5 rolls by the players, and produced fun results, but not necessarily unexpected.

One character, who has a high Criminal trait (which was the trait needed to sneak out to the party), but who is basically a social wallflower, and not at all a “bad boy” got a perfect score.

I had to think for a moment what would happen.

I paused for a moment, and explained that he stood at the party, awkward and relatively quiet, perhaps even uncomfortable. But, the other kids, the ones who wanted to party, drink beer, etc, basically just wanted to be in his aura. By doing nothing, he did everything.

He was cool by not trying at all to be cool.

But, man, all the other kids wanted to be in his presence.

Strong and silent type? Yes. But, this was not at all how I might have predicted what could have happened.

The perfect score meant I needed it to be something great, wonderful, and special.

I am liking this system 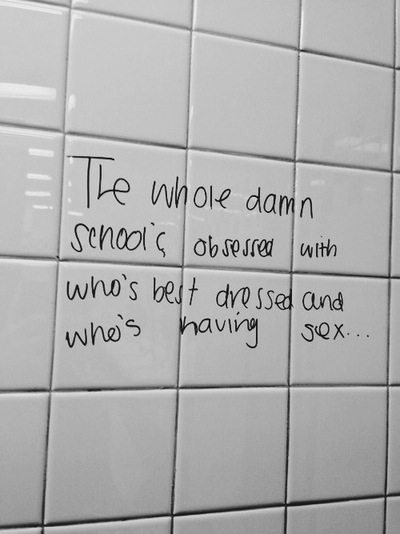 The other new component we experienced was Rumors. Rumors are a real thing, as they should be. Some might be true, some false, some in the middle.

I handed all the characters three rumors. They chose to share them.

But, they also understood the gravity of the situation.

And next session, there will be more Rumors.

The first session had a very unexpected Homecoming King and Queen, the third session had an awesome drinking game.

What is happening in your games?

I have some pretty solid ideas what I want Powers High to be.

It will be not just a set of rules, but a setting, because the mechanics and rules are integral to one another.

I am not sure folks who desire Superhero RPGs will dig it. It will likely not be at all what they are looking for in terms of crunch.

Because, one of my design goals is to have the high school element be more significant than the superpowers.

Because I think this kind of transparency can be fun, here are some of things I am working on with the game:

Who knows what will become of the game, but we are all having a blast playing it and trying out rules. It’s really more the equivalent of a board game like Mystery Date (I have never played MD, I am just indicating it is not at all about punching, it’s about relationships and High School drama).

I ran a playtest of a teenage superheroes (and villains) in high school game this past weekend.

Buy-in was easy with my players, as they kept their characters from my long-running supers campaign, just reverted to high school age, so they knew all the NPCs already, and things in the regular game had gotten very grimdark, so something different was a welcome change of pace.

Many newer games, of the indie persuasion, discuss how we play a game to find out what will happen.

In the most literal sense, that is what this first playtest was, I wanted to see what would happen, and how the game mechanics would work.

What we discovered, is that a game about high school kids, and their relationships, and all the drama and shenanigans that come with it, is a lot of fun.

Not a single punch was thrown, no one even clenched a fist. There was a Tetris tournament, there was chest-puffing, several young female students sat in the bleachers and watched the boys’ sports practice, and it ended with a Sadie Hawkins dance.

And it was a success.

Because of all these things.

The game, both as played, and as designed, encouraged these activities as much as anything.

Will people be interested in a supers game that isn’t about punching?

We were, and for right now, that is what mattered the most.

Future design additions will include a system for holding hands.